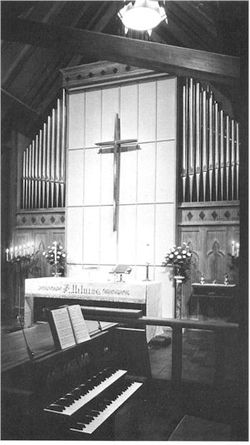 Built around the core of the church erected in Meadowbrook Drive in 1929, our present property has been expanded three times, adding classroom facilities, making additional space available for meetings, increasing the size of the nave, and providing satisfactory offices and a new Sacristy.

​The original altar remains the center of worship in St. Alban's as it has been for sixty years. Today it is seen against the beautiful Casavant pipe organ, installed as a major improvement during the last expansion of the building in 1969.
​
The architect for the 1969 major expansion was Fred Talbot, a parishioner.