​In June, 1935, with the building barely six years old, thoughtless acts of vandalism destroyed the interior of the church. The organ was badly damaged; paint and shellac were spread on furnishings and woodwork; the altar desecrated. It was a staggering blow to the young church. Parents of the culprits made financial restitution, but it took a long summer's work by many parishioners to once again render the place fit for religious services. 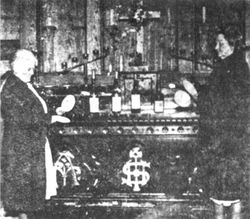 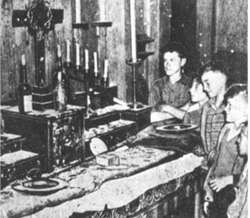 ​Boys of the parish viewing the destruction as it appeared in June. 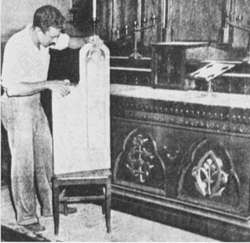 ​At the right, John Horrocks refinishes one of the pews, nearing the end of a long labor. 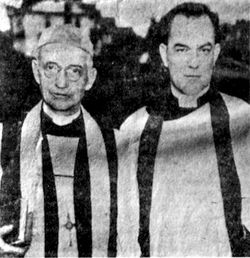 In September, 1935, the church was rededicated by the Rt.. Rev. Edward H. Coley, Suffragan Bishop of Central New York, shown here with the Rev, Joseph 0. Roberts, Priest-in-Charge. Mr. Roberts' ordination to the Priesthood had been scheduled for St. Alban's the Sunday after the vandalism; ceremony had to be moved to St. Paul's.